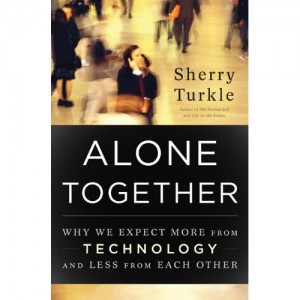 Last summer as we drove up to Maine for a family vacation, I watched my 14 year old nephew and his best friend spend hours texting. When I asked who they were each texting, they looked at me as if I was crazy and stated each other.  Why when they are two feet away from each other were they not just talking I asked? They shrugged and continue typing.

The relationship between man and the computer has been a popular topic for years, however Sherry Turkle of MIT has reexamined the issue and focuses not on the man-machine relationship, but man-man relationship as influenced by technology. Alone Together: Why we expect more from Technology and Less from each other, is an outstanding piece of research that Sociologists, Psychologists and Information Specialists all will find useful. Her conclusions and theories concerning the evolving of human interaction will leave the reader contemplating the ramifications of our new social order and questioning one’s own relationships in the world of social networking.

I highly recommend Alone Together to anyone interested in phenomenon social networking and its relationship with its users.